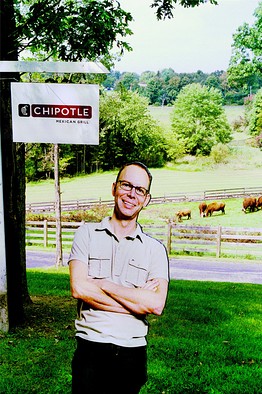 This has been a year when the attention of the food world has been drawn to indie abattoirs and hydrocolloid-obsessed Spaniards, to tomato-farm slavery and shark-fin pirates, to foie gras trucks and $900 meals where you can’t tell the entrees from the plates, to mad chefs wielding liquid-nitrogen canisters and gentler souls instructing you on how to cook and eat your Christmas tree. And yet the most innovative man in the world of food at the moment is Chipotle founder Steve Ells, whose quiet insistence on well-raised meat and local and organic produce at his multibillion-dollar chain is changing the way America eats, one humongous burrito at a time.

Have you ever had a Chipotle burrito? It’s pretty remarkable, a flour tortilla the size of a bathmat, warmed in a machine that looks like an old-fashioned pants-presser, and filled in front of you, spoonful by spoonful, from a series of stews and condiments laid out in immaculate stainless-steel bins: rice; barbacoa beef, pork carnitas, steak or chicken; corn relish or hot salsa; black beans or pinto beans; sour cream or cheese or guacamole or sometimes all three. At the end of the process, unless you show unusual restraint, you are presented with a log that has the heft of a small lapdog. And the company’s growth is as muscular as the product—revenues have tripled since 2006, to about $2 billion; there are now 1,200 stores and 25 percent profit margins. 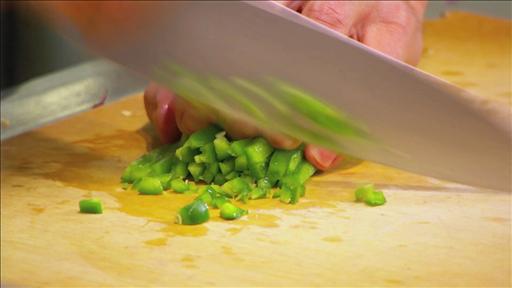 So Chipotle, which was financed for a crucial part of its development by McDonald’s, is the last corporation you might expect to be praised by Peter Singer, philosopher-king of the animal-rights movement. And it is hard to imagine a less-likely ally of the Land Institute’s Wes Jackson, a foe not just of irresponsible agriculture but of the existence of agriculture itself, whose commitment to sustainability makes Alice Waters and Michael Pollan seem like dilettantes.

But as Steve Ells slides behind a weathered-plank table in his office in New York City’s Meatpacking District, the slender, bespectacled man, who more closely resembles a high-school chemistry teacher than he does the chairman of a major corporation, talks about Jackson with the devotion of a college-age activist.

„I know Wes very well,“ Ells says. „I never knew how vital topsoils were before I went down to Kansas to talk to him. And that knowledge, and his wisdom, have helped me make a lot of decisions on what to buy for the restaurants—not just organic beans, for example, but no-till beans, which are difficult to cultivate, but can be grown without devastating the soil. Wes has dedicated his lifetime to this. And I always think about one thing he says: ‚If you can realize your goal in your lifetime, you’re not thinking big enough.‘ “

„Food that’s grown closer to home tastes better. If the food tastes better, people come in more often,“ Ells adds. „Then you can afford to spend more on better ingredients. People ask me why I bother to hire chefs like Nate Appleman [who was a star at San Francisco’s A16 and New York’s Pulino’s] or Kyle Connaughton [from the Fat Duck] when we never change our menu. We may never change our menu, but we are always changing our food.“

Ells’s goal, beyond selling enough burritos each year to fill the Grand Canyon, is to make sustainable food both available to everyone and tasty as hell. When I first started following Chipotle a decade ago, it was because I’d heard that the chain had replaced commodity pork with humanely raised pork from Niman Ranch; that customers were cheerfully paying a higher price for the better meat; and that each of its restaurants sold enough to support a sustainable family farm in Iowa—Chipotle is by far the largest purchaser of natural meat in the United States. All of the chicken it uses is sustainably raised, as is about 85 percent of its beef. It sources its vegetables locally, at least as well as it is able. „We’re not perfect,“ Ells says. „In January, our East Coast restaurants are getting lettuce from California. But we believe in always getting better. We’re proving that you can run a very profitable company and still do the right thing.“

Fast-food entrepreneurs tend to have a background in business. Ells, uniquely, was a chef, trained at the Culinary Institute of America, and with two years at Jeremiah Tower’s famous San Francisco brasserie Stars before he opened the first Chipotle in Denver in 1993.

„Here’s the basic difference between Chipotle and other fast-food restaurants,“ Ells says. „When our employees walk in in the morning, they see food. They have to cook. At the restaurants, we chop cilantro, onions and limes two or three times a day. We make guacamole from fresh avocados. We have 27,000 employees now, and almost all of them are cooks, even the people you see on line serving customers. It’s not all done on site—beans, carnitas and barbacoa are slow-cooked in central facilities and delivered—but cooking is what we do.“

„If you know anything about fast-food rules,“ he adds, „you understand that you’re not allowed to have variability from day to day; not allowed to taste the guacamole and adjust the flavors. The restaurant in Phoenix is supposed to taste exactly like the restaurant in St. Louis. At Chipotle, I can taste the difference from day to day. The limes are juicier at certain times of the year. No two real chickens are exactly the same. A lot of our regular customers tend to like one outlet better than another across town, and I think that’s fine.“

How to Leave Work at Work

19.8k Views By admin
A Guide to Running in Cold Weather
Signs You're Not An Alpha Male
Die Mechaniken des strategischen Content Marketings